It was wonderful to have focussed time to spend entirely on my painting and writing in such a beautiful and inspiring place. My challenge was to balance being there and responding to the place (allowing Hardanger and its people to inspire me) with making progress with work on the way. I also had to balance the different aspects of my art practice – especially writing versus painting.

The discipline and the time limit of the end-date for the residency really helped me to progress my cross-arts practice.
What were the results?  (Here we would like to know of direct artwork results, written texts published or not published)
I painted a lot and produced around 20 40 cm X 40 cm mixed media works on canvas with which I am happy. Plus also some smaller works on canvas and on paper.

These works are in series with work displayed in my current exhibition at the Macau Art Museum Pictures of Nothing at All (128 mixed media, text and photographic panels all 40 x 40cms).
www.macaoculturalagenda.blogspot.hk

In terms of poetry output, while at Messen I continued working on several projects already underway – especially responding to Scandinavian poetry – particularly that of Olav Hauge and Tomas Tranströmer. Importantly, I also started writing poems about Hardanger and Ålvik. I completed three poems but have notes for many more. Already Bjørn Otto Wallevik has begun translating some into Norwegian. I would like to complete a bilingual volume of poems about my Hardanger experiences. (I have made several such placed-based poetry and picture books about other places where I have had residencies or spent time in the past.
My most important project commenced at Messen was a picture book to be titled A Book of One Picture.

While at Messen I drafted the complete text for this work (around 8,000 words) and made many pictures which could be a part of the book. But this project has a long way to go.

I presented a lot of these ‘results’ at our final presentation at Messen, prior to leaving, so I think the community of artists and others who attended would have a fair idea of what I had been doing at Messen.
Also there were good musical interactions and performances with local musicians. I think that was fun for everyone. Not to mention baking and making pizzas!

Over the coming months I hope to type up all of my poem notes from the Messen time and see how much material I have towards a book. Once I’ve done that I will be able to see what gaps there are and think about how to fill them, hopefully on a future residency! But I want to give priority to completing my Book of One Picture  picture book project.

What, if it did, did your stay mean for you in your artistic work and development?
I made substantial progress on a number of fronts, with works completed, continued and commenced as a result of the residency.  The experience was something like taking a deep breath of the clean air in the middle of a very busy academic career. As liberating as it was productive! 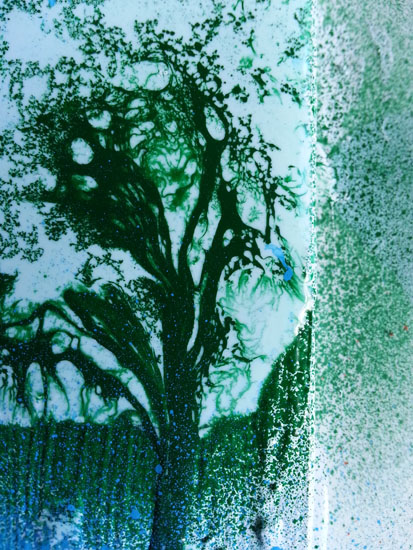 What did your stay do for your knowledge of Hardanger and Norway?
I learnt a lot! And I learnt in the way you can only learn by devoting time in a place to the process of making art out of being there. But of course I want to learn more and to make more of the experience.

How has the stay influenced your contact with other artists?  It was wonderful to be in community with the other artists at Messen. I think strong bonds were established there and I am sure we will all stay in touch with possibilities for future collaboration.

Chrsitopher (Kit) Kelen and Carol Archer (Australia, live and work in Macau and Hong Kong) stayed for 2 months in Messen in 2014

Christopher (Kit) Kelen is a well known Australian poet, scholar and visual artist, and Professor of English at the University of Macau, where he has taught Creative Writing and Literature for the last fourteen years. Volumes of his poetry have been published in Chinese, Portuguese, Italian, Swedish and Filipino languages.