I stayed at Messen during a time when I was transitioning from living in the US to Europe, thus it represented for me a significant turning point. I stayed at the residency for nearly two months, which provided me the opportunity to begin (and complete) some new work and think deeply about issues surrounding my projects and work.

I completed a project entitled Invisible Drawing over the course of the residency period. I used one of the empty rooms at Messen and covered all walls with reams of now-antiquated carbon paper. Used in the building’s original function as administrative center for the neighboring Bjolvefossen factory, the project invited the public to participate by writing a message or making a drawing on the walls. The carbon paper was installed with it’s grey side facing outwards so that when grey pencil is used to write or draw, no marks were visible. Only after weeks of participation was the carbon paper removed to reveal the layers of drawings and writings that accumulated underneath. The resulting overall drawing served as a mirror, reflecting both individual moments in space as well as the collective effort of the participants.

I also worked on a series of reliefs built from layers of cut and painted board. These compositions reflected an abstraction of the stunning mountain and fjord views I had from my studio window, which I could not help but be inspired by.

I worked on other short films, drawings, small sculptures and writings daily, but they were not necessarily part of a complete project. These fragments and freeform ideas often end up being the most valuable pieces in the long term, however, and represent the kind of work that is most enabled by the immersive experience of being at a residency. 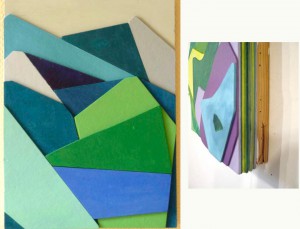 My ancestors immigrated to the US from Norway a century ago, so I was thrilled at the opportunity to stay for an extended time and visit the country for the first time. I explored not only the immediate vicinity and mountains surrounding Alvik, but also visited the surrounding towns. Most memorable was a local exhibition and event in a small town on the opposite side of the fjord, which I visited with some of the other artists in the building. I found all the people I met in the area through the residency program to be curious, engaged, culturally and environmentally aware, and willing to give generously of their time and conversation. This was so valuable in getting a more in depth view into a local culture than one would ordinarily receive by a simple visit as a tourist.

For much of the time I stayed in Messen, I was alone in the house, aside from the couple and their young daughter who lived there part-time, as well as a local artist and local architecture student who held studios in the building during the weekdays. I enjoy working in a solitary environment, thus it was nice for me (particularly coming from New York City) to have some time alone to delve deeply into my work without distractions and to create a self-directed working schedule. That said, during the weeks when other artist were there, I asked for feedback on my projects and even involved some in an interactive installation that I created onsite. Our group explorations of the house itself also provided inspiration and material for new work.