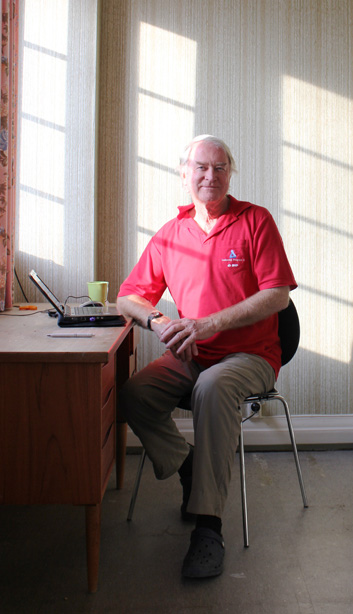 but there’s a sense of displacement or disorientation.
We tourists want it to be midnight,
expectation of fantasy over a screen of fact
but it’s still broad daylight on an overcast day.
Clouds like fallen towers edge along the fjord,
fine films of rain keep the scene shifting,
new images drift over the wooden reels piled like an altar,
a foreshore pyre billows next to the town’s fire truck,
a fireman in protective gear slews fuel on the flames.

We expected other signs across the water,
other torches along the picturesque rim,  other symbols as the night came on,
perhaps a romance of paganism,
primal fire before the light of Christianity,
but the water only smoked with rain.

Enough witches were burned in Christian Norway,
some in Bergen, eighteen once up north in Vardø
to warrant two monuments. Both are in the guides.
All were women condemned by strange weather,
neighbours’ hysteria and the encouragement of torture.
Being Norway, there’s an architect designed
memorial in Vardø. The illusion of an empty chair
is consumed by flames inside a glass space,
as though regret for what happened in 1621
must be never ending, the constant, almost animate fire
more awful, more alive, than stone.

In Vardø only Ingeborg Kroll refused to confess
to flying, drowning sailors or having a tour of hell
before her body gave up to white hot iron cutting,
and her chest burning with sulphur.
Buried on an island opposite the gallows
the shape stretches like another judgment.

In Ålvik children gather in the roped front row
sitting cross legged, themselves tiny idols
who look up and down from the cameras
which they nurse and touch as tenderly as manikins.

Most settle to watch the digital version
once removed from reality,
able to edit and save the furnace of wheels on fire.
Eventually the reels begin to topple
and roll into themselves.
Their round faces look up burning
before rows of screens, a smiling crowd,
and one thousand years of shadows
while small boys, as ever, cry,
More diesel. More diesel.

My stay at Messen proved very important to me as a poet and as a beginning printmaker. I had always hoped to write poems inspired by visual art from Hardanger as well as any other poems that ‘came up’ and this proved to be the case. I was also very creative in writing other poems drawn directly from Ålvik and Norway as from Norwegian history.  I was also able to make contact with other guests, as artists, then friends and we have kept in touch as a kind of international community of artists with our centre in Messen.

I wrote poems an number of poems – ekphrastic poems (ie poems based on visual art). Two, inspired by the work of Wim van den Toorn and Judith Elisabeth de Haan were published in Australia in high quality journals, Quadrant and Famous Reporter, respectively.
Other poems, drawn from the work of Anthony Cervino, sculptor, painters Judy Sirks Vevle and Paul Dikker and an animation of Simone Hooymans, I understand have been shown at exhibitions or are now featured on the artist’s websites.
One longer poem, Midsummer Night, was set in Ålvik and with reference to Norway, won an international poetry competition, the Melbourne Poets’ Union International Poetry Competition, in 2012. It was later published in The Australian Poetry Journal, a significant achievement in poetry.

Being in Messen allowed me the time and space to settle into writing a body of work in creative peace and with the stimulation on fellow artists and supportive staff both in the house and from the group of visual artists who make up Hardingpuls. I am also a beginning printmaker, so the opportunity to see experienced artists at work first hand was invaluable. I also was invited to presentations and exhibitions in Øystese and Norheimsund.

I have taken the opportunity to visit Bergen and see the work at the art galleries there, with special focus on the paintings of Edvard Munch and the old town and castle. I have also visited the fine gallery at Utne and driven around the fjord to Odda, Ulvik and return, eating cherries and strawberries in summer. I was stimulated to research some aspects of Norwegian history in the writing of Midsummer Night. As part of the artistic process one never knows what might ‘come up’ and I will be interested to explore industrial Hardanger to see if there are poems or ideas for etchings there – I suspect there are.

I have been stimulated by contact with artists working in other fields from all over the world, as well as from Hardinpuls and I am very grateful for the opportunity Messen has given me. Specifically, I have ongoing friendships with artists who live in The Netherlands, the U.S.A. Japan and Italy as well as other Australians. It can be a small world and working at Messen hs helped me considerably in my creative life and I hope this connection will long continue.