What did your stay at Messen mean for your artistic work?
We had made a conscious choice for a ‘remote’ place rather than a popular residency in one of the great metropolises where all the artists are clustered together. Our work functions fine “off the road”.

We research the ins and outs of communities – social communities and working ones – with a sharp eye for the blind spots that exist as a consequence of habits and routines. In answer to the issues present in a particular community, we develop outlooks and interventions which are estranged from daily routine, yet are, at the same time, ‘obvious solutions’.
We wondered what would happen if we would work in an isolated area. During our stay in Ålvik in 2011 we developed new public art proposals which responded to national romanticism and tourism in the Hardanger area. Postcards were made of each of these proposals, and distributed throughout the Hardanger region. In 2012 we returned to Ålvik to further develop our plans.

Through our participation in the event GREP Vandring på Fykse, a one-day art event in Fyksesund landscape park at the invitation of Hardingpuls, just two weeks after our arrival, we were among the Norwegians and became acquainted with a lot of regional artists and people living on the fjord. It was the ideal introduction. We felt as if we had become part of a network that extended over a large part of the fjord. And we participated in a tradition of artists playing a role in the representation of the area. Messen appeared to be more than an isolated residency.

Ålvik Rock
In Fyksesund landscape park we discovered beautiful green stones piled alongside the road. They turned out to be waste material from the factory in Ålvik where ferro alloys are produced. In order to draw attention to the deceptive beauty of this waste in the landscape park, we put industrial souvenirs up for sale, using the name Ålvik Rock (freely adapted from the name of an annual heavy metal festival in Ålvik). We situated a salon table with the ‘precious stones’ on top of the pile of rocks at the side of the road, and left it up to the visitors – they could either pay a hefty price for the stones on the table or else take one for free from the pile. The stones were frequently photographed or secretly picked off the pile when we weren’t paying attention (one was sold for 215 NOK), but more importantly, they were really looked at for the first time.

Stabbur
The further into the tourist season we got, the more the narrow roads became clogged with campers. We (just as the Norwegians) began to become irritated with this ‘white mould’ – tourists who had filled their mobile home-from-home with products from their own land and set up their camps at free stopping points. This tension culminated in the design for a sculpture of a camper with a grass roof, and balanced on bricks – a camper as stabbur, the traditional Norwegian food shed. From within the sculpture, local food products could be sold as a statement about the parasitic attitude of the camping tourists. At the same time, the site could develop into a tourist attraction.

We discovered that patterns used in Hardanger embroidery and folk costumes (bunads) make ideal parking spaces when they are applied to the surface of the road with road paint. We made our first design for the Hardanger car park during our first residency in Ålvik which began on the 17th of May 2011 (the day on which Norway celebrates its constitution with parades and people wearing traditional folk costumes). On our return to Norway in 2012 we tested the Hardanger car park design on the car park of Kunstnarhuset Messen in Ålvik. This temporary intervention was received with great enthusiasm by the Hardanger Folkemuseum in Utne which exhibits traditional Hardanger embroidery and costumes and has Norway’s largest collection of traditional Hardanger fiddles, and as a result, the museum invited us to tailor the pattern to the museum’s own car park. The museum began fundraising for the realisation of this artwork.

Other proposals include a waterfall as carwash, and a salmon farm as swimming pool. On one of the postcards we made, the Norwegian identity is brought into question through a landscape populated with Asian farmers. And lastly, in the Jonsok Tattoo, the traditional Norwegian mid-summer celebrations are connected to tattoos in the local Tattoo Shop. 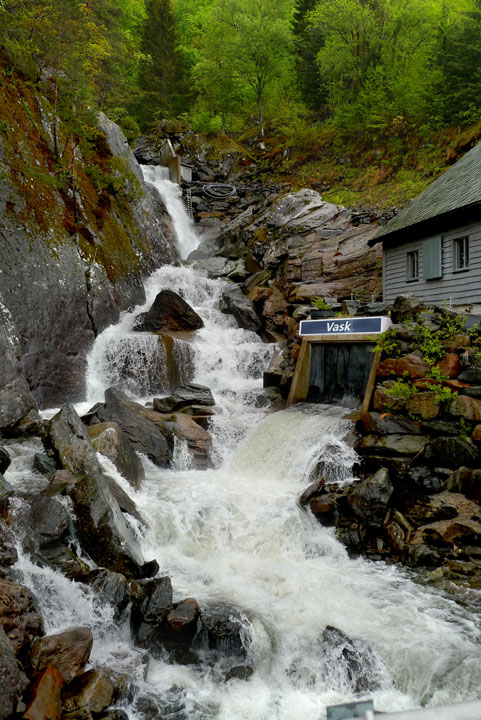 Sjaak wrote an article about our stay titled ’The Norwegian fairytale’ in the Dutch BK-informatie magazine. Furthermore we contributed to a workshop on landscape art at the invitation of Hardingpuls and to the exhibitions ‘Messen’ in Galleri Puls in Norheimsund and ‘Holland i Hardanger’ in the Hardanger Folkemuseum in Utne.

What did your stay do for your knowledge of Hardanger and Norway?
We had visited Norway several times as tourists, but we really got to know Norway, the Norwegians and the Hardanger region in particular, during our stay at Messen. Rosé got so enthousiastic that she started taking Norwegian language courses back home.
How has the stay influenced your contact with other artists?

We enjoyed the contact with other artists very much. We discussed our work with people from very different backgrounds and disciplines. We also had a lot of contact with regional artists through workshops. Because you live together in a house for a few months you really get to know each other very well, including all artistic and private ups and downs. We came back to Messen several times to visit our Norwegian friends en stayed in contact with the other artists through mail, Facebook and Skype. American sculptor Anthony Cervino contacted us for a residency at Dickinson College in Carlisle (US). Unfortunately it didn’t fit in our schedule. Canadian artist Jim Holyoak took part in the exhibition Yes naturally, how art will save the world at the GEM Museum for Contemporary Art in the Hague after we had introduced him to the curator. Dutch painter Paul Dikker invited us together with Els Geelen to take part in the exhibition ‘Holland i Hardanger’ in the Hardanger Folkemuseum in Utne. We’ll meet poet Ross Donlon again during his short stay in the Netherlands this autumn.